Chaos embraces the principle of possibility unencumbered by rules. The effects of Chaos can be beautiful, but left unchecked, they become too disruptive for life.

Chaos the most ancient of gods; the personification of the infinity of space preceding creation of the universe.

The Lords of Chaos accepts players of any level who are mature, enjoy playing Fallen Sword (read: active!), and are looking for a community of other like-minded individuals. Our focus is on having fun and helping other guild members do the same. We've bumped our recruitment requirements up and now accept join requests from level 100+ players and actively recruit fun folks level 150 and up. For up to date information please visit::tLoC's Fallen Sword Guild Page

The Lords of Chaos was founded on the 3rd Oct 2007 and named such in tribute to the writings of Michael Moorcock. We broke into the Top 200 Guilds on the 15th Jan 2008. Our original guild founder stepped down and Quintas took charge 21st February 2008.

For a long time we tried to keep the guild under 30 members.... but there were so many that needed a home. We've grown and shrunk as time progresses; these days we try to stay above 60 members.

For a detailed account of our history see our back-story below. 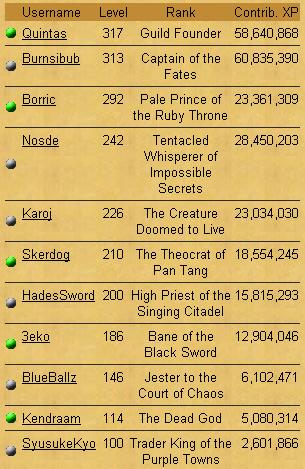 Due to tweaks in XP requirments, please visit our website to see our ranking structure. It's open to the public! Ranking

Back Story: the Beginning

This was written along time ago. To update it is too great a task. I am leaving it in as part of our historical documentation.

Founded by Kendraam in Oct 2007, quickly gained 7 solid members Borric, Quintas, Nosde, Majorshea, WolfDreams, taya141414 and Burnsibub. Early principles were to be a small guild of loyal players who were free to do as they pleased in the best traditions of Chaos.

After some expansion some members were being targeted by Araldite, an aggressive member of Thirty Somethings. Our first guild war erupted and after some battles a NAP was agreed. In the fullness of time, Araldite and Kendraam became allies in their quest to become top Bounty Hunters.

Majorshea retired from the game and WolfDreams left to form her own guild The Culling and another early member Benwade jumped ship. This caused a bit of a set back, but the remaining members plowed forward and more members were brought in.

The guild rapidly broke into the Top 250 guilds and had many of the guild structures. We grew by accepting low level members and assisting them to form a loyal and valuable core of players.

After some trouble with The Wicked Players nearly caused the retirement of Karoj, we decided that expanding and upgrading the guild should be a priority as we were not good enough to take on one of the most hated guilds in Fallen Sword.

The next battle came when some Conan2008 in The Gaz Squad had Kendraam deleveled 4 times for merely attempting his bounty. This ridiculous and unwarranted attack lead to a massive guild war.

Attempts were made via some intermediaries but SirGaz13 and his cohort thegod07 refused any negotiation and the attacks continued. Some heroes on the Chaos side, Karoj, Atriarch, Jasmine 52, KyoSyusuke and RedSonja21 assisted Kendraam in taking the fight to the Gaz Squad. However due to the indecision and procrastination of high level members the war ceased as the guild's gunslinger Kendraam couldn't hit any of the Gaz Squad as no one would post a bounty on their members.

After fighting a lone battle, Kendraam personally deleveled thegod07 doing 1.3 Million XP damage who was then 97 levels above him, and went into retirement.

The effects of this rumbled around for days and the guild nearly disintegrated: Borric and Naquadah left, other members were banned & suspended, and our membership seemed to be trickling away. However under the careful leadership of Quintas and other members we held together. 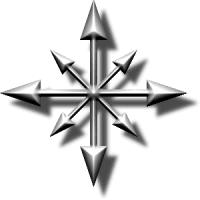 Stats as of the 27th of August in the year of of our Lord Two-Thousand-and-Eight:

Heroes of Our Past