Welcome to the fantasy world of Fallen Sword RPG !! You are an adventurer who seeks excitement and challenge during your journey. In this world of chaos, creature are everywhere and it your job to slay them all as you journey to other parts of the world. But as you journey you'll come across many other adventurer like your self and gain many new weapons and armors to help you. (Sorry not good at making intros, but if you wish to help me please PM me in the forum)

This is where your account name will appear. And when you highlight it, it will show your :

Stamina is the main sources of many of your action you do in the game. When you highlight on it, it will show your :

Recruit Link is used to get your friends and families to join this game under your character. When your recruit reaches certain level you will be awarded with FSP (Fallen Sword Point) (will cover this shortly) . Click on the icon to learn more about it.

XP Bar is shows you how close your account is close to leveling up. When you highlight it, it will show your :

FSP is what you might call the diamond of this game. FSP can be used on variety of stuff like upgrading your account, upgrading your weapons and armors and etc..., and can fetch an incredibly high price.

Gold Bar shows how much golds you have gained in the game. When you highlight it, it will show your :

There are only 5 stats in the game and those are :

Here is what you need to learn about stats : 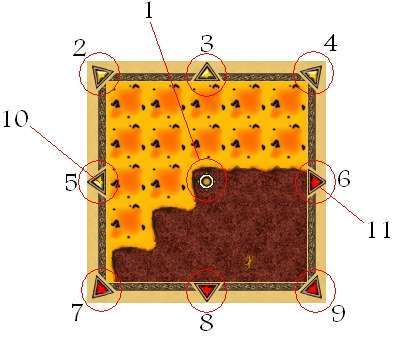 * Note that the S key does nothing. 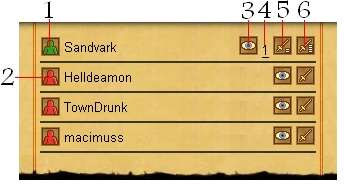 The Character Menu is where all your personal items, skills and messages can be found.

(Sorry, I couldn't get the profile page on 1 picture so i had to divide them up) 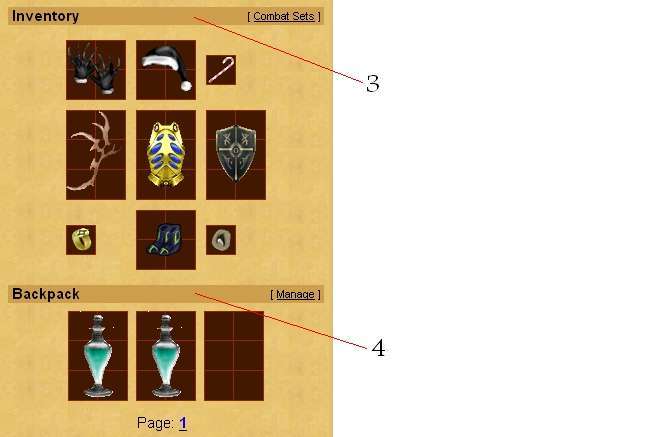 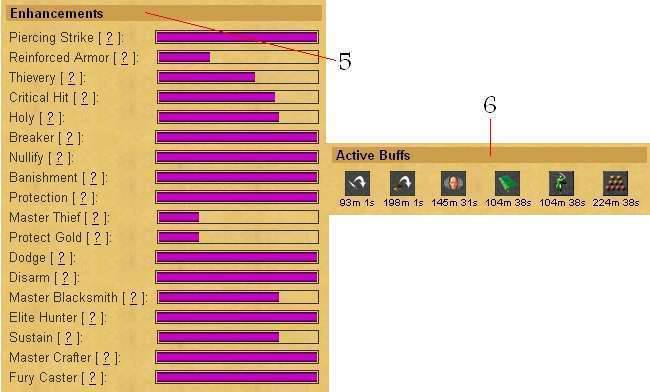 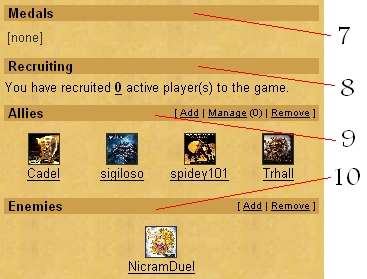 what image you add, there are children playing in this game.

Skills (Normally we call them buffs) are abilities to enhance your character during game. There are 3 type of skills and they are : 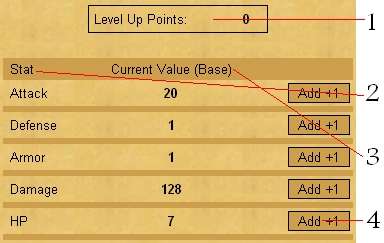 Notepad is used as a reminder in case you forgotten what you need to do. 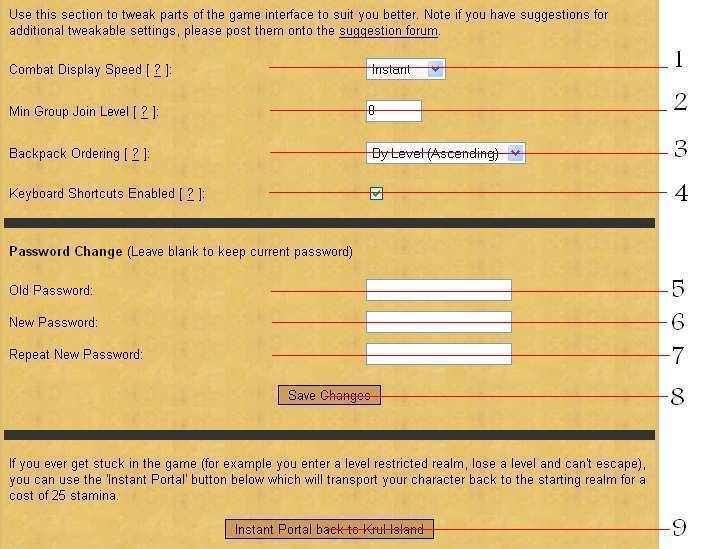 World Menu allows you to view where you are.

View World will immediately take you where you are.

Action Menu is where you can find all the stuff you can buy, sell, trade and ect..... while playing this game. 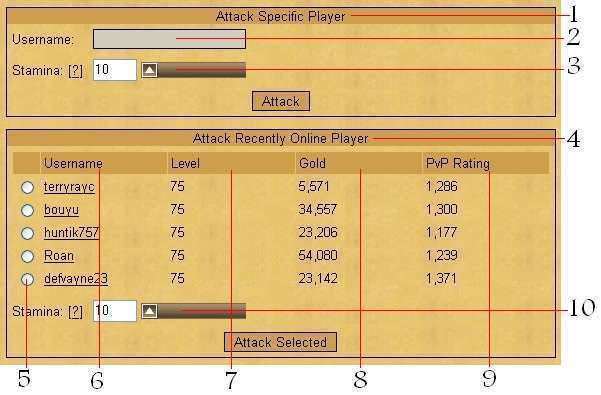 Bank is where you can store your golds in hand into your personal bank. By doing this you can keep your money safe from people whom going to try to steal your golds in hand. You can only deposit 25% of your current golds, example 25% of 943 golds is 236. You start with 1 deposit, if you want more goto upgrade section and buy +1 Deposit for 50 FSP. 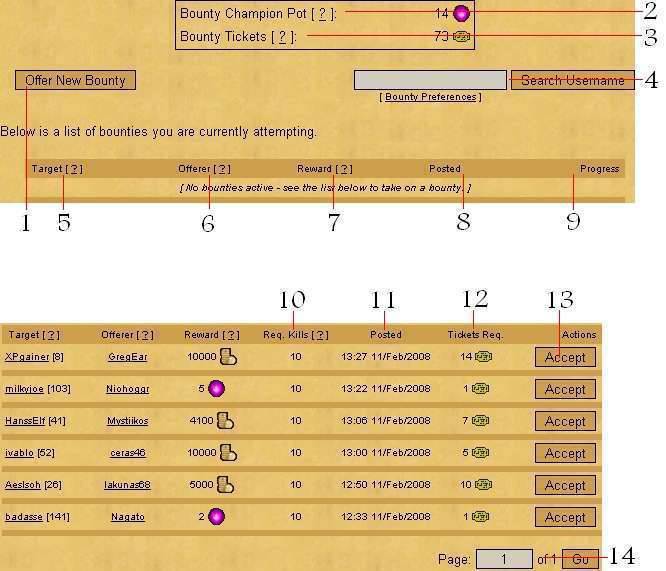 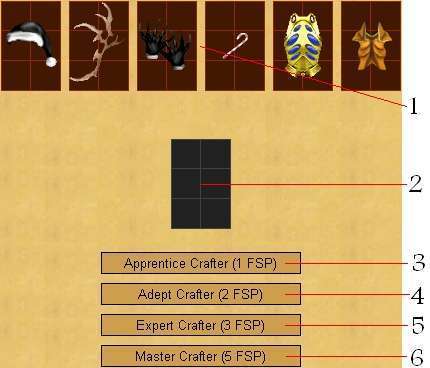 Note that every craft has different stat, so if you craft 2 items and get same craft level you may see that both stat are not the same. 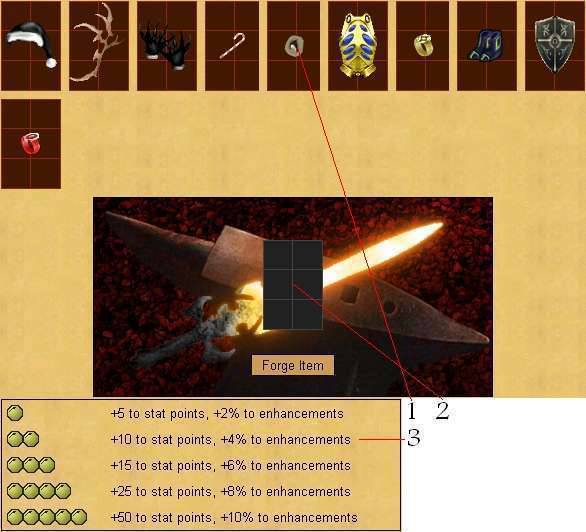 Temple is where you have highest chance of wining a free rewards without paying anything. There are 4 gods to pray to win :

Auction House is where you can buy gears and potion for your self to help you out on your quest.

To get Items for your current level, goto preference then select the minimum and maximum level item you want to look for. Then press save and click back to see the items.

Send to Players is used to send Golds, FSP and/or Items to someone else.

Secure Trade is used to buy and sell Items for FSP and/or Golds.

Send Message is where you chat privately with someone else.

Find Player option is used to search for a player you have in mind. 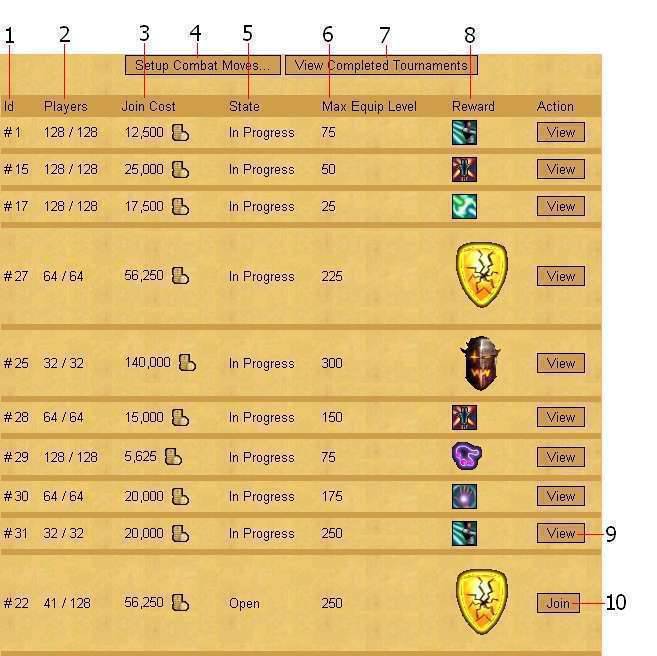 a) Open : Where you are free to join the tournament. b) In Progress : Where the tournament has already begun and you cannot participate in it.

This menu allow you to join or create a guild.

Create Guild allows you to make your own guild. You'll need to be atleast level 50 and have lots of FSP to invest in your guild.

Join Guild allows you to apply membership to a certain guild.

A-Z List will show you every single guild that has been made in this game.

After joining a Guild, you'll get new option which allow you to view guilds pages and stuff. 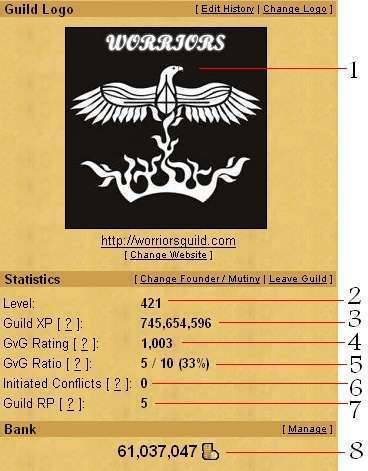 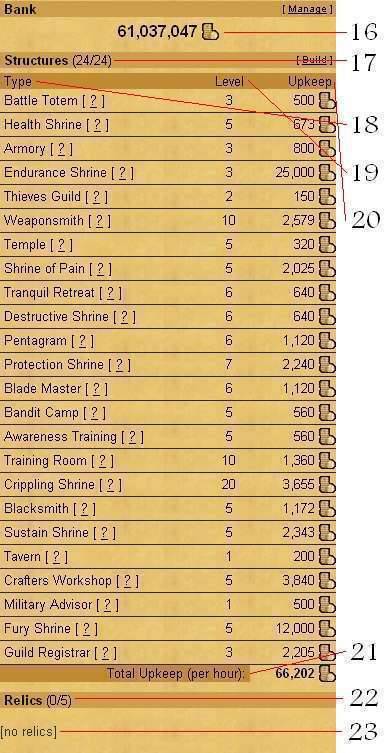 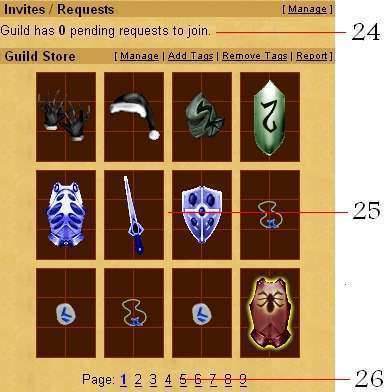 Invite is used only by Guild Founders and Guild Leaders to invite certain people into the guild. Request shows if there are other players outside of the guild wants to apply into the guild.

Invite is used only by Guild Founders and Guild Leaders to invite certain people into the guild. Request shows if there are other players outside of the guild wants to apply into the guild.

Groups is where you create a group attack to either attack a champion/elite/super elite/legendary creature or capture relics from other guilds.

Guild Log will show you any activity that has happened in the guild for example items going in and out of guild or someone depositing or withdrawing golds in guild and etc....

Chat is where you talk to online people.

Upgrades is where you can deposit (Non-withdrawable so becareful) FSP into guild and use the FSP to upgrade guild stuff like extra member slot or upgrade amount of mercs. and relic you can capture and etc...

Same as A-Z List before joining guild.Also type in name of guild in the box and it will show u the guild u desire if it exists.

Relic Control will show you which guild has which relic and how long they been controlling it. 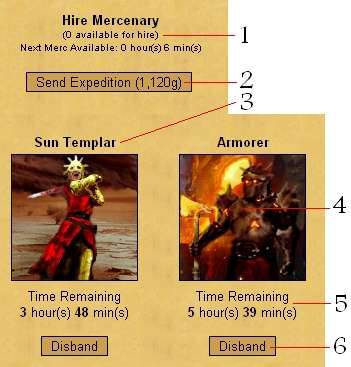 Conflict is where you go on a war against another guild, wining a conflict will award you a Reputation for your victory. You will also gain a few GvG points (Guild vs. Guild) which is pretty much that same as PvP points. (Player vs. Player)

Top Rated is where you can see the top 250 players, guilds, bounty hunters and etc...

Top Players is where the top 100 players of the same month and year you and the other players are ranked. This way you can have a chance of being a top 100 player.

Top 250 Players is where the Highest level player is ranked. Staying at Top for certain amount of days will award you with a medal for your achievement.

Richest Player is where the Richest player in Fallen Sword is ranked. Staying at Top for certain amount of days will award you with a medal for your achievement.

PvP Ladder is where the highest PvP points players are ranked. Staying at Top for certain amount of days will award you with a medal for your achievement.

Rising Star shows who has leveled up the most within 24 hours. Not really interesting but fun when comparing with your guild mate within your level.

Arena Champions shows who has the most wins in PvP Arena.

Top 250 Guild is where the best guild are ranked. It is also best way to find good guilds to join in.

Richest Guild show the top 250 richest guild in the game. Well what more do you want me to explain Wink .

Upgrades is where you can Use, Buy and get Free FSP.

(Will not add picture due to progress of the game (a.k.a new ideas will be added here in future reference) )

Use Point is where you can use your FSP to upgrade/enhance your character account. Heres a brief explanation of what each upgrade does :

+10 Maximum Stamina = Increases your maximum stamina by 10 points. The more you buy the longer you can hunt creatures and do more action.

+10 Gold Gain (per hour) = Increases your Gold Gain by 10 points per hour. Good way of getting more golds when your away on vacation, business trip, etc...

+1 Bank Deposits per Day = Increases the amount of deposits by 1 daily.

+1 Inventory (Backpack) Slot = Increases the amount of space in your backpack to store items.

+1 Max Allies = Increases the amount of allies you can add by 1.

+1 Max Enemies = Increases the amount of enemies you can add by 1.

+1 Max Auctions = Increases the amount of auctions you can add by 1. Also good for selling lots of items at once.

Protect XP = Protect XP save your XP lose when your killed by a creature. The more you buy the less XP you lose. This upgrade does not work if you are bountied via Bounty Board.

+1 Max Secure Trades = Increases your Secure Trade by 1. This is not needed upgrade as we do not use it everyday.

Refill All Bank Deposits = When your out of bank deposit, use this upgrade to refill your bank deposit.

Bounty Tickets (100x) = If you like taking bounties or chosen to become a bounty hunter, then it is advisable to have atleast minimum 200-400 tickets as you'll be doing lots of bounties.

Reset 'Level Up' Points = This upgrade will reset your Level Up Points and be able to redistribute your points.

+1 Marketplace Listing = Increases your market listing by 1. If you have more then 400 FSP and ant to sell them in different prices, then use this upgrade.

+1 Combat Sets = Increases your combat sets by 1. If you have lots of items in your backpack and have no room for extra set slots, then use this upgrade.

+25 Bio Characters = Increases your bio character by 25 letters. If you run out of text limit in your bio, then use this upgrade.

For more info on which upgrade is best click on this link : http://forum.fallensword.com/viewtopic.php?t=55485

Buying Points is where you can buy FSP with real money. Donating money helps the developers keep this game free and alive for all to play.

The current methods to buy FSP are :

Free Points is where players can earn free FSP by completing certain requirements from different offers. Some offers involves in :

Note that not all players can do these Free Points offer as we all are from different countries. If you don't see any offer from your country then do not complaint as your not the only one who's not having this advantage. Also do not ask someone from another country to do that offer for you as HCS stated that no one can help anyone do the free offers, or the 2 party might face account suspension or termination.

Recruit is where you can find your recruit link. Using recruit link in forums or SMS or etc... outside of this game forum, might get other people into the game to play. Ofcourse you won't be rewarded empty handed, if your recruit reaches a certain you'll get free FSP. Here are the level your recruit must reach to get the FSP :

You can get a maximum of 30 FSP when your recruit reaches level 100. For each friend you refer to the game, as they level up you will receive the following rewards...

http://stats.rubicksman.com/best.php <--- Note this is not up to date

http://onemanmob.page.tl/Best-Locations-to-Train-at-your-Current-Level.htm <-- Dunno if HCS allows this

http://www.fallenswordirc.com/ <--- There are always people willing too help on here

What ? You seriously expecting me to explain what a forum is ? Get serious -.- !!

Wiki is where you'll find all of players contribution to the game like tutorials, Fallen Sword Guide, Calculators and etc...